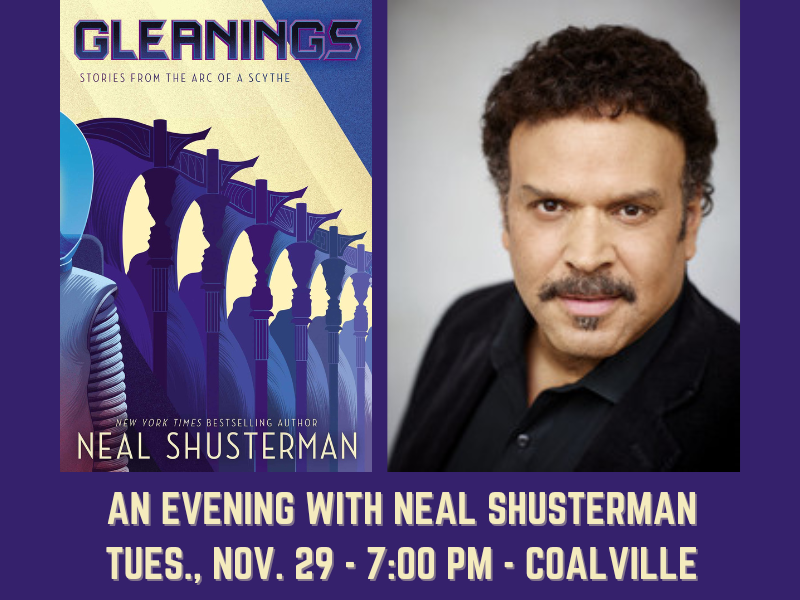 Please join us for a special evening with critically acclaimed author Neal Shusterman on Tuesday, November 29th at 7:00 p.m. in Coalville at the Ledges Event Center (202 Park Rd., Coalville, UT 84017).

Neal Shusterman is the New York Times best-selling author of over thirty novels for children, teens, and adults. He won the 2015 National Book Award for Young People’s Literature for Challenger Deep. His novel, Scythe, was a 2017 Michael L. Printz Honor book and is in development with Universal Studios as a feature film. His novel, Unwind, has become part of the literary canon in many school districts across the country and has won more than thirty domestic and international awards. He co-wrote his recent novel, Dry, with his son Jarrod, and in addition to being on numerous award lists, Dry is currently in development with Paramount Pictures. His novel, Game Changer, is in development with Netflix as a TV series, and he is co-writing the pilot episode.

Shusterman has also received awards from organizations such as the International Reading Association, and the American Library Association, and has garnered a myriad of state and local awards across the country. His talents range from film directing, to writing music and stage plays, and has even tried his hand at creating games.

Shusterman has earned a reputation as a storyteller and dynamic speaker. As a speaker, he is in constant demand at schools and conferences. Degrees in both psychology and drama give him a unique approach to writing, and his novels always deal with topics that appeal to adults as well as teens, weaving true-to-life characters into sensitive and riveting issues, and binding it all together with a unique and entertaining sense of humor. Neal lives in Jacksonville, Florida, but spends much of his time travelling the world speaking, and signing books for readers.

Dolly's Bookstore will have books available to purchase and have signed by Neal Shusterman at the event. This event is free and open to anyone who would like to attend. Thank you to the North Summit School District and Dolly's Bookstore for helping to make this event possible.

Please sign up for this event and we will send you any future updates.